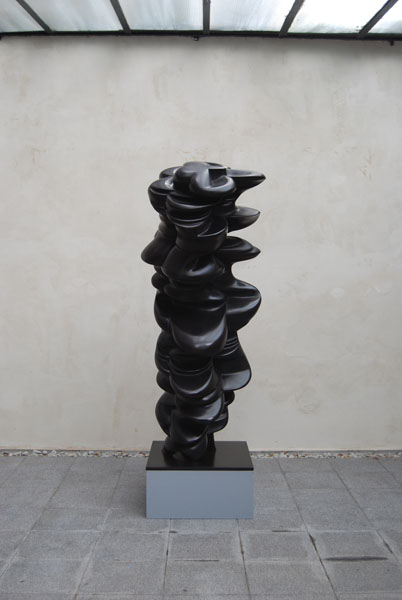 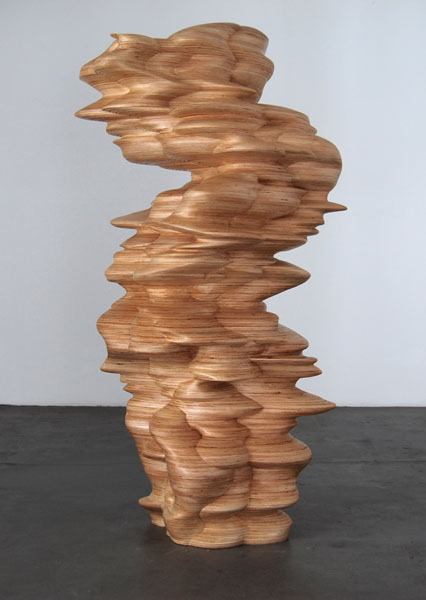 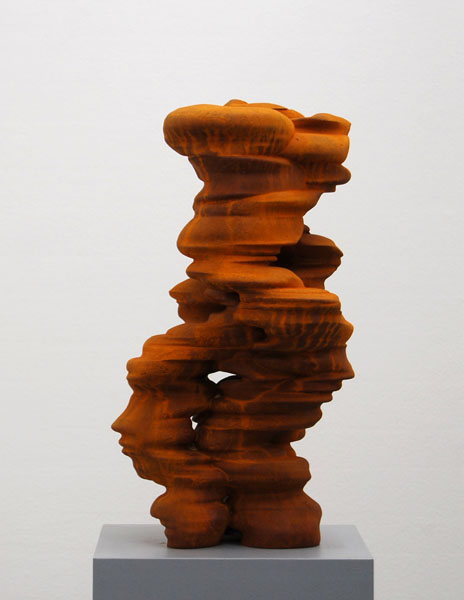 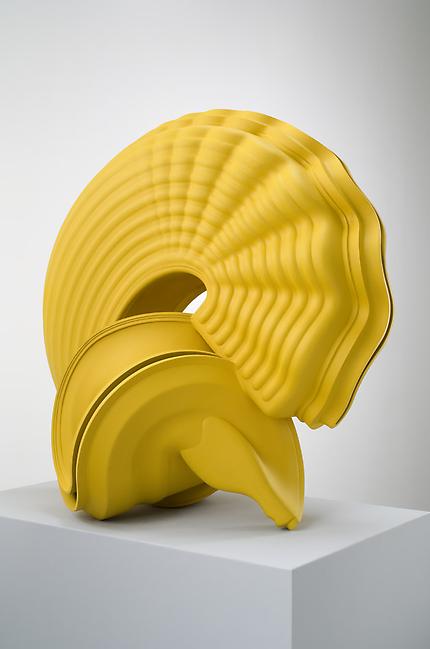 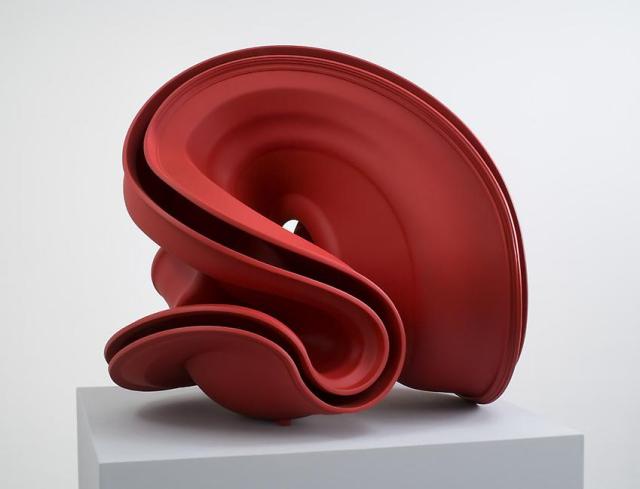 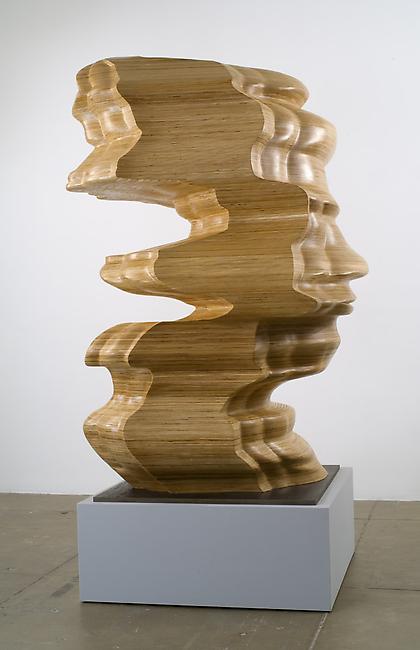 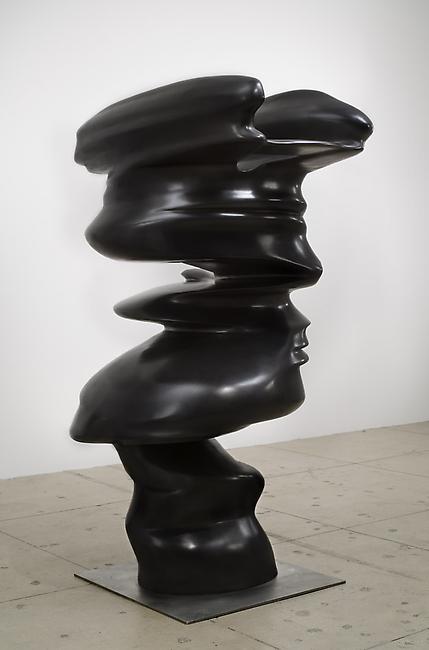 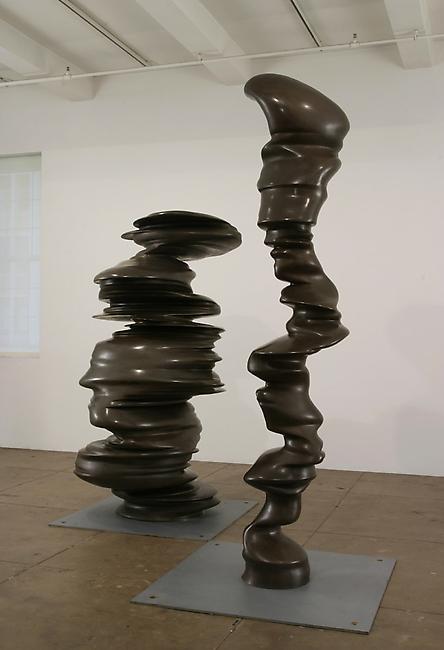 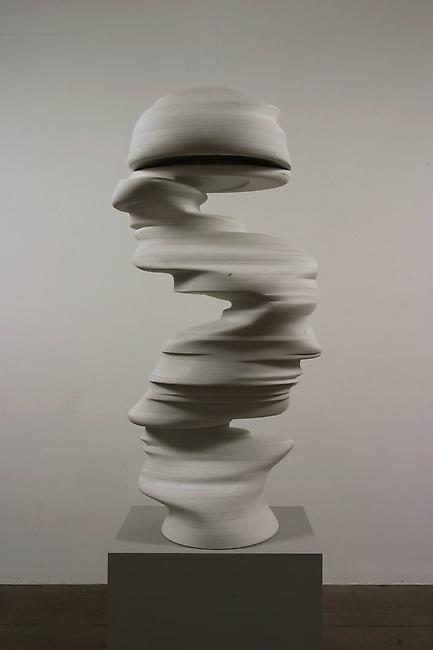 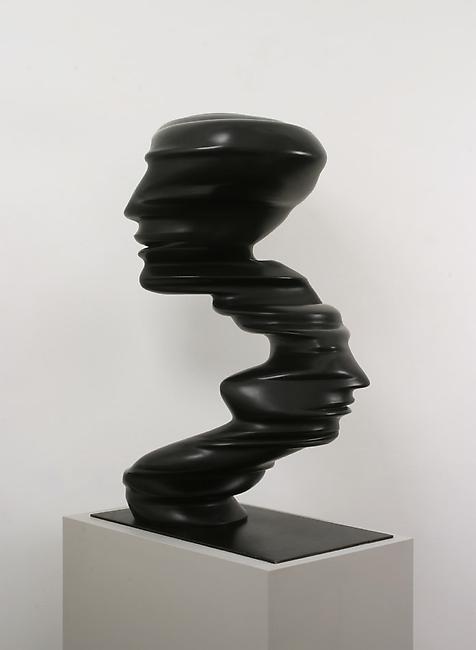 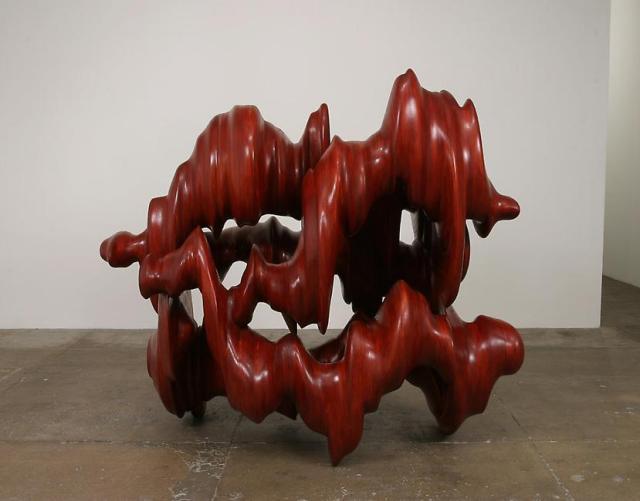 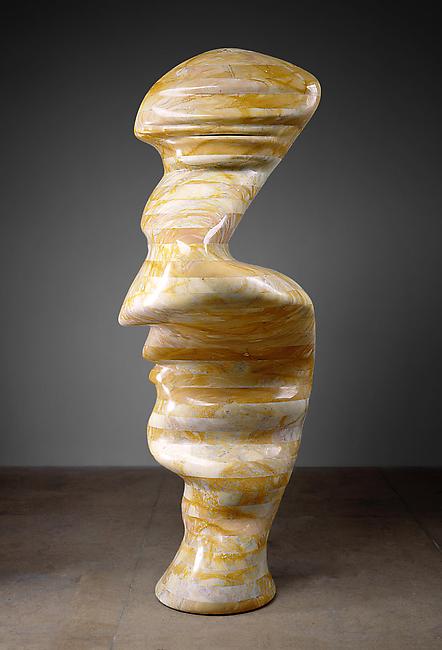 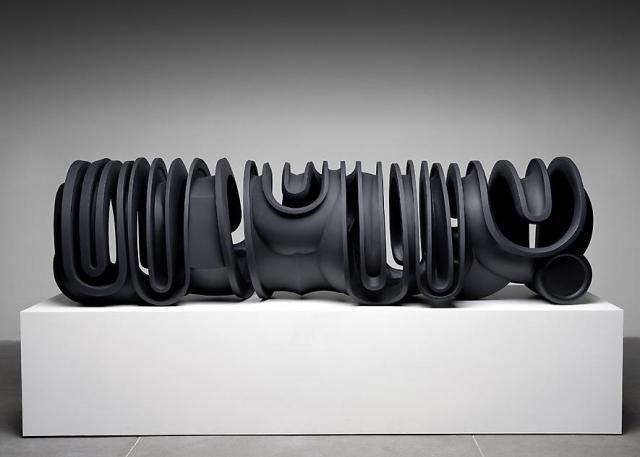 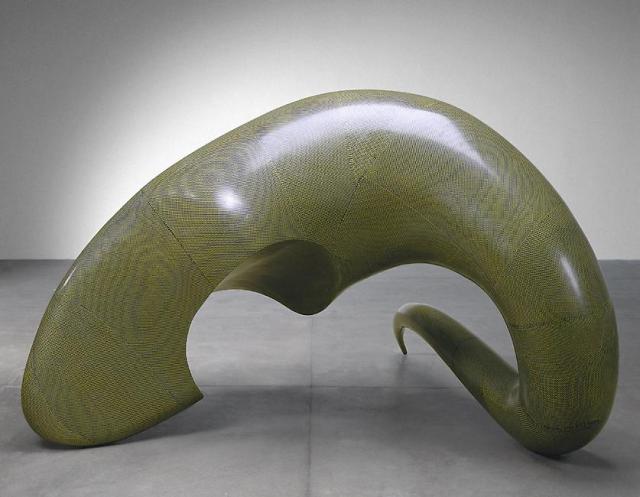 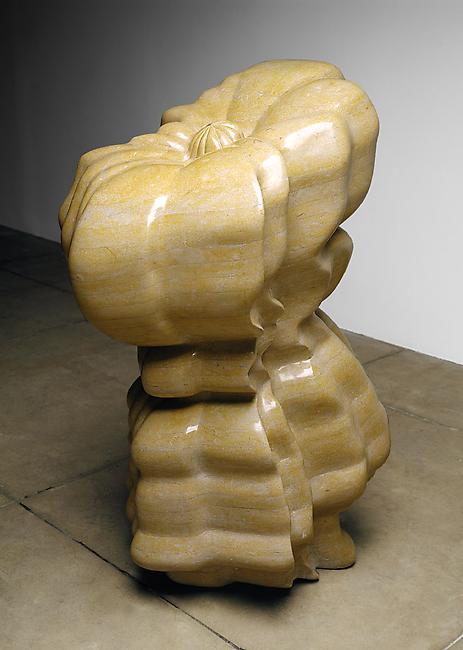 I can understand it being put like that. There are two histories: one is the history of sculpture in the last 100 years, and then there’s my history. At the end of the 19th century, sculpture was almost all figurative, and it didn’t use many different materials. Then, under the pressure of the world filling up with all sorts of industrial objects and materials, Marcel Duchamp, among others, offered the possibility of bringing non-art materials into the art world. Today, after almost 100 years of Duchamp-esque strategy, we can use almost anything. It’s interesting because it’s not only materials—there are tools and meanings as well.

I went to art school in 1969. That was a period that was really Duchamp-esque. Artists were still looking for new materials, and as a young artist that’s inevitably what I took up. And I was also looking for new spatial contexts. I started to exhibit in the late ’70s, and did a lot of installative work in the late ’70s and early ’80s. I was very lucky that I had the opportunity to find some new materials as a tail-end gesture of that process.

In the ’80s, this Duchamp-esque strategy was running out of steam. What’s the point of finding the 150,000th new material to make art with? Who cares? My focus went away from looking for new materials and new objects, and it went toward more psychological and more expressive content. Now that we had this new vocabulary of things, what were we going to express with it?

I was already tired of making installative art by 1981. Far too often I found myself in a situation with a material or an object and I’d think to myself, “Christ! If I just had more time to work with it.” By ’82, ’83, that’s what I did, I just packed up and went back into the studio. I got a much bigger studio, and had two really good assistants at the time. We just learnt to make things.

And “making things” seems to have driven your work ever since. I can’t see you as the sort of artist who’d employ a fabricator.

I’ve got nothing against it at a conceptual or moral or ethical level, but I really don’t like the idea of letting the work be made by somebody else. If you make the drawing or the maquette and then give it to someone else to make the sculpture, you get back a product. It’s like meeting a relative that you’ve never met before. You think, “Mmm, I should know you, but I don’t really …” I tried it in the early ’80s and it was eminently unsuccessful, because I rely on the pathway of making the thing: all of the junctions where decisions are made. That is what is really exciting about making this stuff—having the thinking process that’s going on parallel to the making.

Until I was 19 I had no idea that sculpture could be exciting. I was at art school in Cheltenham, and they said, “This week you’re making a sculpture,” and I thought, “Oh my God! Not sculpture. That’s not what I came here for.” We were shown a broom cupboard full of old material that looked like it had been recycled into sculptures every year. I had no real desire to do it, but I went to the cupboard and I took this material out and by the end of the afternoon I was totally absorbed. It was strange, and it was rapid—like watching the changing expressions on a person’s face when you’re talking to them. Every move I made, it became a different thing. Ideas were flowing and it was really exciting.

That excitement is genuine in my life. There is this idea that sculpture is static, or maybe even dead, but I feel absolutely contrary to that. I’m not a religious person—I’m an absolute materialist—and for me material is exciting and ultimately sublime. When I’m involved in making sculpture, I’m looking for a system of belief or ethics in the material. I want that material to have a dynamic, to push and move and grow.

I also want that to happen over the course of making things, so that as soon as one generation of sculptures has gone up, another generation is coming on and things are growing up around me. That’s how it seems to work for me.

Let me explore this a little further. You’ve described sculpture as “the attempt to project intelligence into material.” What does that mean?

Material is only intelligent as long as we are using it. Material that we don’t know about is not intelligent in our terms. Intelligence is something that we can only describe in terms of a faculty that we have. So we’re projecting something into the material.

Is that the same as giving meaning to material?

Meaning is more or less the same. Something that we don’t know about is absolutely meaningless to us. Here’s a classic example. If you go out into a field and dig up a piece of clay, it’s relatively meaningless. (Though it may mean something to a geologist or a geochemist, and it probably means something to the farmer, because he’s now got a hole in his field.) But when you bring the clay into the studio and start to look at it and push it around, it changes and moves. If you leave the room and somebody else comes in and they see this piece of clay, they get ideas and they feel emotions and they feel expression. The material is carrying a bit of your intelligence off with it. It’s no longer just this piece of clay with chemical or geological meaning; it has lots of other meanings. When you’re looking at a great sculpture, you’re not thinking about the clay, you’re thinking about the meaning. Sometimes people say that work is “formal.” This is such a stupid idea, because you can’t have form without meaning. That’s absolutely impossible.

You’re an artist who has always attached importance to talking and writing about your work. How do you see the relationship between verbal and sculptural languages?

Well, I think they have the same relationship as seeing something and smelling it. The fact that you can smell things takes nothing away from the fact that you can see them, nor does it add anything. They’re just two very different ways of getting into the associative cloud of meaning around the work.

I have to think about my work. If I have to think about it why shouldn’t I have some sentences in my head to say what those thoughts might be? I can’t see it from any other perspective. And the thing is, the work has provided me with a lot of language. It sounds trite but it’s true. It’s fantastic—looking at the work, thinking about the work, all of these thoughts are bubbling through. And I can write them down.

You’ve been working as a sculptor for almost 40 years. You obviously regard it as a viable contemporary activity.

Well, the medium is growing enormously fast. What sculpture does now compared to what it did 100 years ago is absolutely amazing. When artists started making non-figurative or non-representational sculpture—I don’t want to say “abstract”—that was a very rare use of materials. A lot of people look at objects on a scale of usefulness. They think, “This is a good object because I can use it well. And if I can use it even better, then it’s a better-looking object.” That’s how the idea of the utilitarian object was born, and that’s what all the other material in the world is doing. Sculpture doesn’t have that. Sculpture is a radical use of materials, a radical human activity. It’s eminently useless. But you can make your own discoveries with it and provide yourself with a language that useful objects are never going to give you. Usefulness in the material world is a censor to form.

In the past you might have looked at non-representation and you might have thought that it was a little bit ungrounded or spurious, but now you realize that there’s an enormous range of possibilities. That’s why two kinds of sculpture don’t often interfere with one another in a destructive way—they’re so damn far apart. You can get a sense of the space between them. It’s the space for artists of the future to work in.

I also think that the way that we look at sculpture is important, because it’s not moving and you realize how kineastically you look at it—you are the moving element. What a challenge this is for our perceptions. Perhaps you were going to ask, “What is your favorite material?” The most important material is our own brains, because that’s where you effect the change. Change outside is OK, but the real change is in our own brains.

Transmissions from an island somewhere in the Philippines. Integrating daily art practice & other initiatives from the physical world down to virtual space. To see my daily artworks, you can visit my site at: http://dailypractice.tumblr.com http://brownskinartist.multiply.com
View all posts by fARTiculate →
This entry was posted in sculpture and tagged alexander de moscoso, daily practice, farticulate, robert ayers, sculpture, tony cragg, www.artinfo.com, www.artnet.com, www.konradfischergalerie.de, www.mariangoodman.com. Bookmark the permalink.