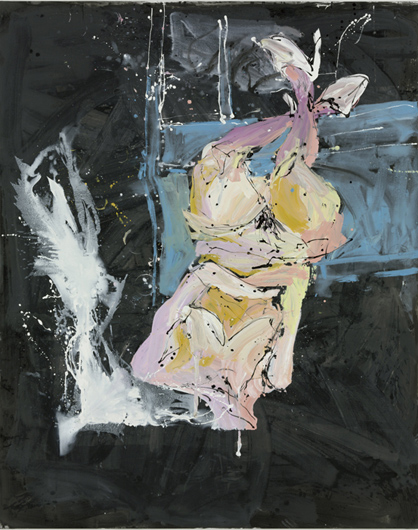 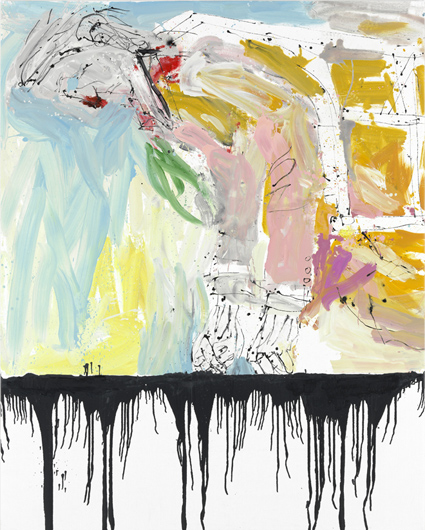 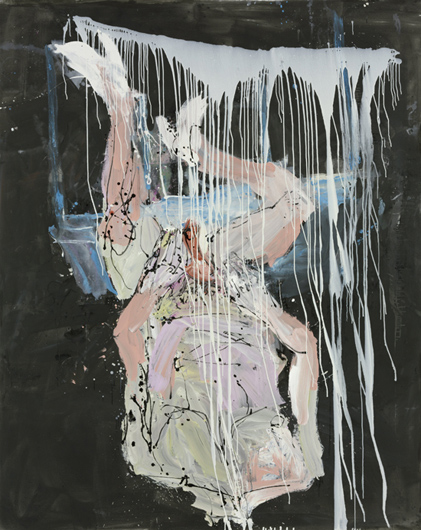 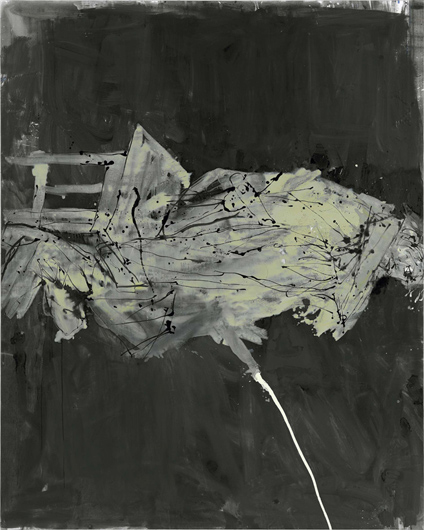 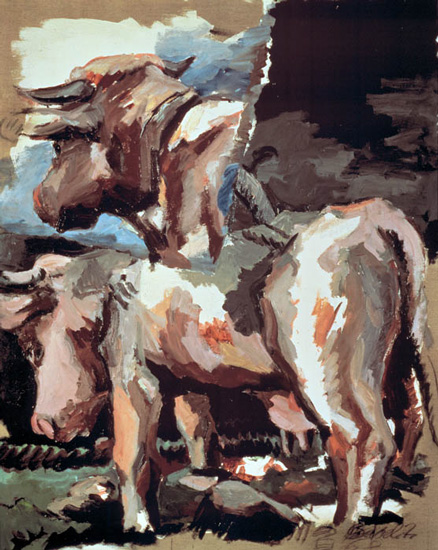 PAMELA KORT: When you think back to the ’80s, what comes to the surface for you?

GEORG BASELITZ: I’d like to talk about my relationship with America. It began in 1980. I showed a sculpture at the Venice Biennale, in the German pavilion with Anselm Kiefer. Shortly thereafter, Ileana Sonnabend sent me a letter, which was the first correspondence I had ever received from America. Within a week I got another letter, this time from Xavier Fourcade. Both gallerists offered me exhibitions. Their offers were totally unexpected; I didn’t think that there was an interest in German art in America. So Michael Werner and I talked about it. Two invitations at once, how could one choose? I decided I would show new paintings in both galleries–including Die Madchen von Olmo [The Girls from Olmo, 1981], “Orangenesser” [Orange–eater, 1981], and “Trinker” [Drinker, 1981] at Fourcade and “Adler” [Eagle, 1981-82] and “Frau am Strand” [Woman on the beach, 1981-82] at Sonnabend. Both gallerists wanted me to show with them again. The second time, Sonnabend decided to exhibit my recent sculpture. Fourcade, howev er, was more interested in educating an American public about what I had done over the past twenty years, so he mounted a kind of retrospective that included my “Helden” [Heroes] paintings from the 1960s.

PK: How were the shows received?

GB: The reception was tremendous. Many paintings sold, to an extent they hadn’t yet in Europe. I got the impression that in America everything was much easier and that my problems were gone.

PK: What kind of problems?

GB: Working as an artist in Europe and especially in Germany, you have to react to what society demands of you. I experienced this on the occasion of my first one man show, at Galerie Werner & Katz in 1963 in Berlin. My paintings Die grosse Nacht im Fimer [The Big night down the drain, 1962-63] and Der Nackte Mann [The naked man, 1962] were confiscated by the district attorney on charges of public indecency. It was not until 1965 that the judicial process ended and the works were returned. Compared with this, America seemed to me completely open and free of ideological pressures.

PK: Were you Inspired by American art even before you started showing there?

GB: In 1958, when I was a student at the Art Academy in West Berlin, Alfred Barr mounted a huge exhibition of Abstract Expressionist work called “New American Painting.” We’d been adherents of the School of Paris, but this show blotted out that influence and surpassed it.

PK: When was your first actual contact with young American painters?

GB: I met Julian Schnabel in London in 1981, during the installation of “A New Spirit in Painting,” at the Royal Academy of Arts. Julian was very well informed about European art and my work. That astonished me. I began to believe that maybe there was genuine interest in America about recent developments in German painting. But looming in the back of my mind was Joseph Beuys’s failure to attain the accolades he deserved on the occasion of his 1979 retrospective at the Guggenheim in New York.

PK: In the American press Beuys’s work was connected with the expressionist tradition. Were you concerned that a similar rubric would be used to describe your work?

GB: I always rejected any connection with the expressionist or neo-expressionist tradition. Unlike the expressionists, I have never been interested in renewing the world through the vehicle of art. Nevertheless, when you step back and consider my post-1980 work, there is no doubt that it has a relationship to paintings by Ernst Ludwig Kirchner and Emil Nolde. These works represent my reaction to expressionist art during the ’80s, when the theme of expressionism came to the fore in America.

PK: Would it be correct to say that one of your greatest paintings, Der Bruckechor [The Brucke chorus, 1983], was inspired by the reception of German art in America?

GB: Yes, but it’s a little more complicated than that. I had always loved expressionist painting, like every European. In fact I admired it all the more because these were precisely the paintings despised by my father’s generation. Their denouncement made them especially appealing to me as a human being, but not as an artist. The accusation that my art was expressionist brought out a certain aggressiveness in me and compelled me to begin closely examining the aesthetic dimensions of German Expressionist paintings. At first I occupied myself with Nolde: I questioned what he really wanted to achieve with his paintings, and then I started to paint. Many of the works I made around this time represent my reactions–sometimes amused but often extremely serious–to pictures by the Brucke artists. For example, the “Orangenesser” series from the early ’80s were small-format pictures, which for me was really unusual.

PK: Did this new style have to do with the freedom that America gave you?

GB: No. Changes in style within my work have nothing to do with how my paintings are perceived internationally. Changes in style result from intellectual processes. I continually try to find something new so that I can change. I still do it today. But getting back to your question, I believe the most consequential effect that showing my paintings in America had on me was that I realized one could work without being hampered by ideological constructs. At the moment, a number of my paintings are defined by what I would call a certain reflective sentimentality. In my left hand I now hold a photograph or a picture and in the right one a brush. It was different in the ‘8os, when I was painting works like “Orangenesser.” Then I was boxing with both hands, so to speak.

PK: Do you think the fact that you are originally from Dresden, which in the ’80s was part of East Germany, had something to do with your reaction to the success of your shows in America?

GB: It had a lot to do with it. Artists from the East were always subject to particular pressures. I know that American artists faced difficult circumstances, but for them being an artist was never connected to the threat of arrest. Here in Europe, particularly in the ’60s and ’70s, artists were well aware that making work meant risking one’s person. My new contact with America in the ’80s changed all that. I felt as though invisible shackles constricting me had been whisked away. And that remains true to this day. For both Anselm Kiefer and me, the greatest success our careers has come in America.

PK: How did Germans react to your success in America?

GB: In Germany people are skeptical about artists who are successful, who do important things. But it’s also true that I experienced moments of enormous support in Germany. The situation fluctuates between endorsement and contempt. There are accolades, but there are just as many wisecracks. In between, there is jealousy.

PK: Earlier you mentioned Julian Schnabel as one of the first American artists you met. Did you eventually become friends with other painters, like Fischl and Salle?

GB: No, not really. I got to know Joel Schapiro and met Chuck Close several times. And above all there was Robert Rauschenberg, whom I met in Basel when I showed at the Kunstmuseum in 1984. I really admire Rauschenberg’s paintings; the brilliance and variety of his output is simply astonishing. However, my closest painter friends at that time were A.R. Penck, Jorg Immendorff, Markus Li.ipertz, Anselm Kiefer, and Per Kirkeby. Later I got to know Francesco Clemente; he always called me “Maestro,” which amused me a great deal. Nevertheless, these relationships could not be extended into lasting friendships. It was impossible not only because our works were so different but also because of our ideological positions. Artists primarily speak of art, and after that there is immediate trouble. You can’t talk about dogs or horses forever.

PK: Why didn’t you continue to show with Fourcade or Sonnabend?

GB: I began to show at Mary Boone when Michael Werner became involved with her and spent more time in America. Later, I exhibited increasingly at Pace Gallery.

PK: Has the art scene in New York changed much since the ’80s?

GB: Back then artists were treated like football stars. It was a very fun, adventurous time. It’s a shame we didn’t make even better use it.

PK: What do you mean?

GB: For me, it’s simply a matter of age. Look, I was forty. At forty you’re at the height of your physical power, and of course at the height of your life. Looking back, I believe the most decisive aspect of my encounter with America and its artists and patrons was that it gave me new information. And this is the most important thing you can bestow upon a young artist. At the beginning of my career in postwar Germany it was difficult to become informed about past and current developments in art. There was also a lack of vigor in Germany: The art scene was far from lively and the market anything but strong. Barr’s show was the first to open me up. Then there was the experience of America that began in the ’80s and continues today. In those years I became even more antagonistic than I had previously been. The ‘8os helped me to rearrange everything; I was able to set up a whole range of ideas and experiences anew, which meant I was able to break everything down so I could make something out of it again. Now, for the first time, almost at the end of my career, I have found a method in which I very slowly disappear from the process. I pull back, so to speak, so that I can float a little higher. It never was important for me to be part of a consensus. What counts most is finding new ways to get the world down in paint on my own terms. In recent years I have become even more productive; I am constantly making new work. I stand in front of these new paintings and those I made more than twenty years ago and ask myself, “My God, how have I done all of this?” (end)

Pamela Kort is a New York-based art historian and associate curator at the Schirn Kunsthalle in Frankfurt.

AS TOLD TO LARISSA HARRIS

Transmissions from an island somewhere in the Philippines. Integrating daily art practice & other initiatives from the physical world down to virtual space. To see my daily artworks, you can visit my site at: http://dailypractice.tumblr.com http://brownskinartist.multiply.com
View all posts by fARTiculate →
This entry was posted in painting and tagged alex espanola, daily practice, farticulate, georg baselitz, painting, pamela kort, ropac.net, zwirnerandwirth.com. Bookmark the permalink.