Posted on December 9, 2010 by fARTiculate 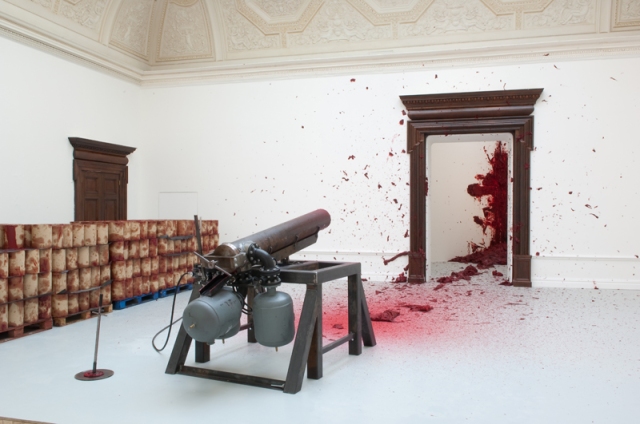 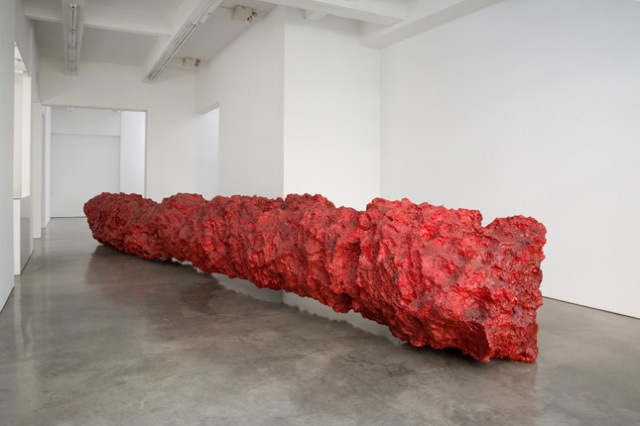 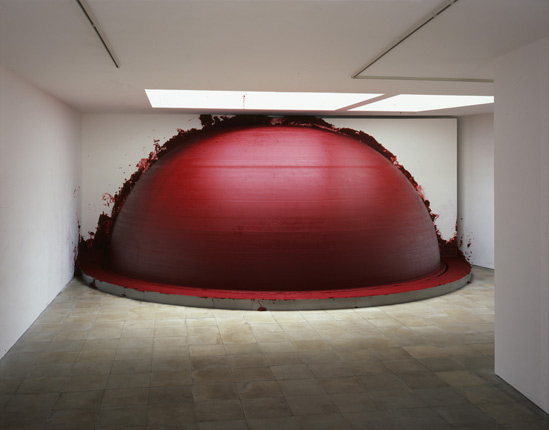 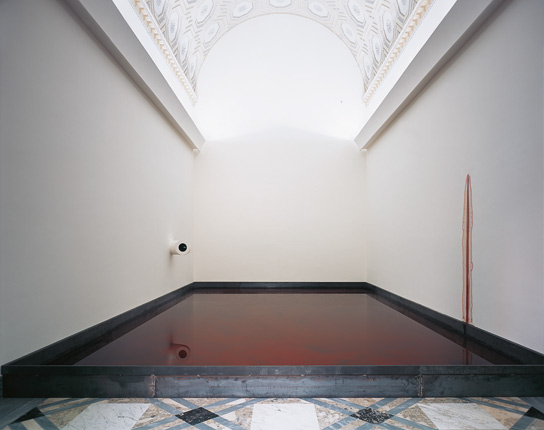 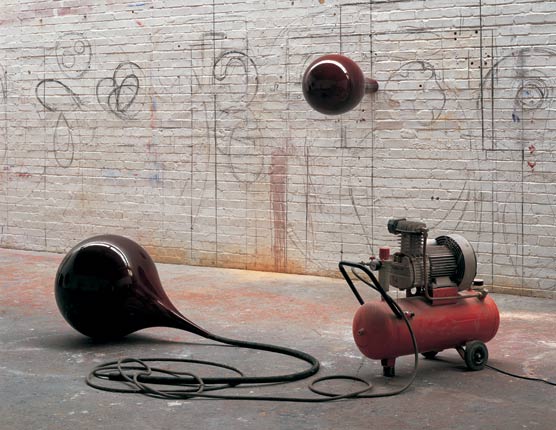 MD- In an age that art expression is highly motivated by personal or auto biographical elements, your work stands out by challenging the very craft of art. Do you consider yourself to be a formalist?

AK – I think autobiography is a very interesting but rather minor art form.

The art that I admire does something more than tell my little psycho biographical story, who’s interested? We are here for a few minutes, and then we are dead. If art is to endure it must have to do with much more than that. Now maybe the only way we can get to bigger subjects is through psychobiography. I hate formalism, because formalism implies a death of the subject and the subject is the only reason to be an artist. Not that I have something to say, I have nothing to say, the whole reason to be an artist in fact is to uncover, in the process of working, some deeper truth. As Bruce Nauman said, the artist reveals deep mystic truth, but to reveal deep mystic truth implies that one knows what they are, the point is that one does not know what they are, an artist may stumble upon them maybe?

MD- Is your work more what it is or what it appears to be?

AK – In my work what it is and what it appears to be are often confused with each other. Take Ascension for example, what I am interested in is the idea of the immaterial becoming an object, which is what’s happening in Ascension, smoke is becoming a column. Also somewhere embedded in this work is the idea that Moses followed a column of smoke, a column of light, into the desert.

MD So your work is more what it appears to be then?

AK – Well I say yes, I don’t know it is in between the two

MD- Did you ever study human perception?

Did I ever study it? Only empirically, only in process. Do you know there’s a wonderful Christian idea in which Thomas stretches his hands out to try to touch Christ’s wound and Christ says ‘Noli me tangere’ (do not touch me). What your eyes see your hands will always try to affirm. Much of dealing with the non-material is about this confusion between the hand and the eye, the ear and the eye, when the thing that you look at is uncertain, your body demands a kind of readjustment, it demands certainty. Something happens to where you are, to space; time changes. Time, I think, becomes slower. The mystical truth of art is time.

MD – Your work has reached highly Architectural complexity, you are known for working to a level that’s way beyond the artist’s hands and reach. How do you relate to the process of art making into that scale which leads me to some words that have been said about you: massive, immense, gigantic, sublime, and then size matters?

The other part of the immaterial or non material is the idea of the immense. The immense inspires us all. Eyes wide open if you like. I think it’s not so far away from the problem of time.

I think of Caspar David Friedrich’s two figures standing on the edge of the cliff and looking at the immense landscape, they’re lost in wonder, they are lost in time. Standing there in a timeless space, I think scale is the same thing.

MD- From every image of you I always see that your eyes blink when you talk about the project or one idea. You seem like an extremely motivated person. What motivates you? Where do you get your kicks from, what moves you?

AK – I don’t know. That’s a hard one. I mean I’m enthusiastic, I love engaging. It’s also very exciting to make new projects, to open up the potential for a situation to reveal a poetic possibility. To be honest I’m bubbling with ideas. There are a hundred things I want to do.

MD -You were born in India to a Jewish Family, you are English now, and you are Buddhist. Where did the concept of belonging appeared to you? Where do you belong?

AK – I was born in India, my mother is Jewish, and we were brought up as much Jewish as anything else. We felt we were foreigners. I’m used to being a foreigner.

It is only now in the last ten years since my children have been with us and they define themselves as British I begin to wonder maybe I am too. It is a strange thing, I am used to the idea of not being included in that way. I quite like it of course. It has its advantages.

MD You mention creation. Do you see yourself as one that interprets or translates what the work wants to be or as someone inventing it from scratch? Do you listen to your works?

AK – I do not translate. I repeat processes again and again. Continually re-working is a process in fact of listening, re-iterating. Re-watching, looking again and again and again. The same problems. Repetition comes to be not just a repeating as the word says but also a kind of a meditation on a particular condition.

Duchamp would say “The effect of being an artist on the artist is more important than the work is”:

MD – Do you ever visit your pieces after they have been “born”:? Do you ever go back to see them again?

AK – Yes, obviously there are some I like more than others. There are some that sustain me and others that seem to change or I changed.

MD – Let’s talk about light. You’ve been working a lot with pieces that are based on light. The ancient Greeks used to believe that light comes out of the eyes to illuminate the world. Your work with light emanates light. In concept what is the source of light for you? How do you deal with light?

I always felt very concerned with the viewer. I feel I don’t make work for somebody else, I make what I make for me. Yet I am very concerned with the viewer, in a sense that art is very good at intimacy and very good at a specific address. Most of my works demand that you look at them from a particular place. That seems to say that there is this very specific quite formal address. The work demands a certain kind of passage. That of course doesn’t answer your question of light, but it does say something about the ritual of looking.

I would say that more than light, yes, much of my work is about darkness.

MD Which is a form of light, or at least the absence of it. Which is related to the idea of light.

Darkness is a very interesting condition.

Light is something if you like, that we wake into. My instinct it’s that it is not an internal condition. Light is cultured and educated, while darkness is uncultured and uneducated and deeply within in our unspoken story. From Dante to Freud to the Devil, we live, if you like, an internal darkness. The fact that we know it, each one of us, is both frightening and intimate.

I’ve made works over the years that deal with that internal darkness. The whole of western philosophy is based on the idea that Plato sat in the cave, metaphorically, looked up to the light and said “let there be progress”:.

I have made lot of work with black and blue, particularly blue, because blue is a colour that much more deeply reveals darkness than does black. From a phenomenological point of view your eyes can’t quite focus on blue.

MD You did study perception …

AK – I think the interplay between the phenomenological, the perceptual, and the psychological is the heart of what makes art. Over the last so many years almost everything I have made is red.

Red is a colour of the earth, it’s not a colour of deep space; it’s obviously the color of blood and body. I have a feeling that the darkness that it reveals is a much deeper and darker darkness than that of blue or black.

I’m not interested in composition. I want to find absolute conditions. if I make something red it’s not red in relation to something else. It’s red in the same way that when you put your hand into the water it is wet. So I want the red as red as water is wet.

MD- What is the color of your homeland?

MD – Why do you say that you have nothing to say?

If you like, the truth that the artist looks for comes from the interaction between the process of making and the meanings that arrive out of that process. One has to listen to them. Then there’s something, maybe to work with. Until then there’s only one’s psychobiography.

Transmissions from an island somewhere in the Philippines. Integrating daily art practice & other initiatives from the physical world down to virtual space.
View all posts by fARTiculate →
This entry was posted in installation art, sculpture and tagged anish kapoor, daily practice, farticulate, installation, sculpture. Bookmark the permalink.