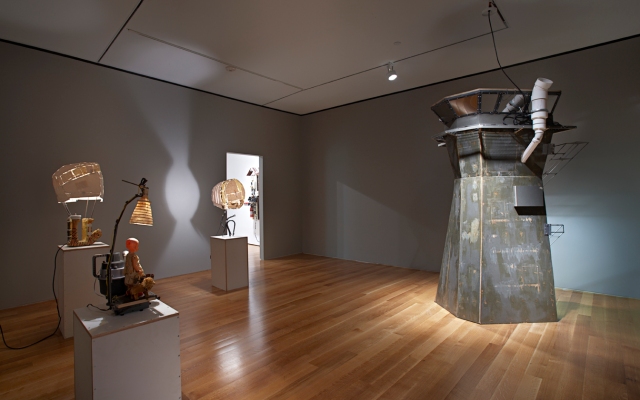 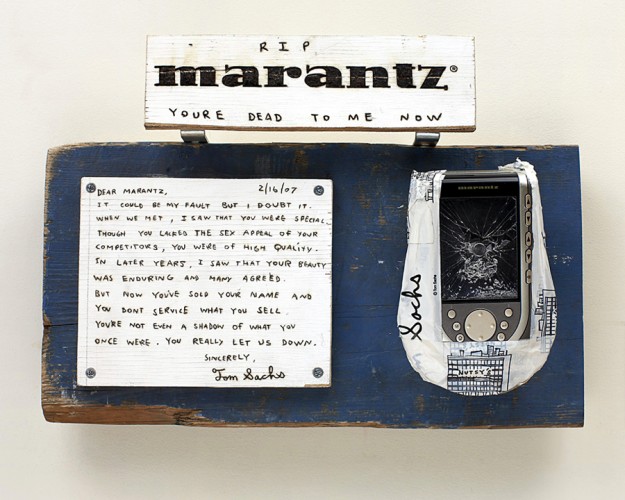 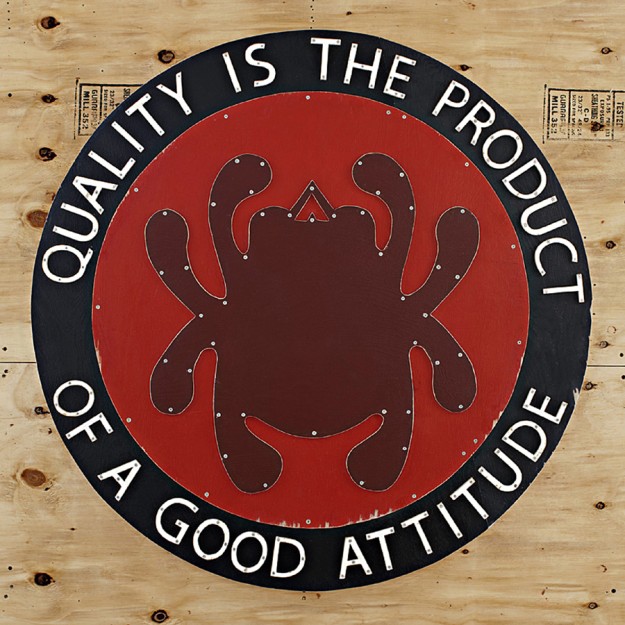 AK: After studying architecture in London in the ’80s, you worked for industrial designer Tom Dixon and architect Frank Gehry. What did you learn from them that you later applied to your own practice?

TS: Tom taught me about stealing, which he called “salvage.” Back then, there wasn’t a lot of money in London, or in my pockets. We’d break into an old building, rip out the parquet, and install it in his studio. I also stole food so that I could buy welding rods or parts for my motorcycle. I was learning about the importance of being outside the economic system; to be an artist, you have to be willing to break the laws of economics. When I first started my own studio, I was doing a lot of welding-repair work. I could get $50 an hour, so I was able to leverage the hours of my day job, which gave me more time to make art.

My experience with Frank was more like The Karate Kid — “Wax on, wax off.” I mastered one very, very simple task — cutting a piece of maple down to two inches and sanding it perfectly — and by repeating that task over and over again for a year, by streamlining my actions and honing my craft with this one repetitious task, I was able to then transfer that same kind of focus and expertise to all other aspects of my life.

AK: How did you come up with Allied Cultural Prosthetics as the name of your New York studio, and how does that name relate to your practice?

TS: Before I occupied my studio on Centre Street, the space belonged to Allied Machinery Exchange, one of the last stores in the former machinery-resale district. But Allied Cultural Prosthetics came from my reading a lot of postmodern theory and becoming aware of the loss of cultural identity. When you lose a leg, you get a prosthetic one, and I realized that some of the things that I was trying to make were surrogates for an identity, or even a soul. I don’t actually use the name much, except on my official letterhead, but it represents some of the ideas that I started working with 20 years ago, and those ideas are still around.

AK: You use the term “bricolage” to describe your DIY aesthetic. What does bricolage mean to you, and how do you use this philosophical process to transform everyday objects into something new?

TS: “Bricolage” is a word I learned from Richard Wentworth‘s lecture series,Making Due and Getting By. It’s a technique of ad hoc construction, and it’s very common in the third world, as well as in places like New York, where there’s lots of money, but little stable infrastructure. I began to use bricolage when I was reusing materials, like that parquet flooring, to expand my otherwise limited resources. But as my resources grew — whether that was because I was finding better stuff in dumpsters, or I was making more money as a welder or a contemporary artist — I still kept using materials as efficiently as possible. Sometimes bricolage relates to a conceptual efficiency, and I’m just recontextualizing an idea, or changing the application. Making aChanel Guillotine is putting together a brand image and an icon of death, and combined in that way, one plus one equals a million.

AK: A blogger recently referred to you as a “Brand Bastardizer,” which is certainly apropos, considering your Prada Toilet, Hermes Hand Grenade, andChanel Guillotine pieces. What is it that you like or dislike about these luxury brands?

TS: I like fashion when it makes you look sexy, but I hate it when it makes you feel sad or stupid for not having it. And also with something like a $14,000 handbag, where did that money go, and how was that thing really made? But I feel that I’m particularly authorized to talk on this subject because I myself am so conflicted. I don’t issue these brands, and I don’t celebrate them, but I still have them in my life — sometimes I try to avoid them, and sometimes I celebrate their ostentation.

AK: In many of your works, you re-create objects as an alternative way of possessing them. What does it mean to bypass the original in that way?

TS: I’ve always loved the works of Piet Mondrian, and when I first moved to New York, I really wanted one of his pieces. I could have made getting money a priority in my life — by becoming a hedge-fund trader, or a bank robber, or whatever — so that I could buy things like a Mondrian, but instead, I decided to cut to the chase and make my own from scratch by studying his works and using gaffer tape. And by studying them, I really learned a lot — there’s nothing like making a model of something to really understand it.

If you go down to Canal Street and buy Gucci sunglasses for $5, they’re not fake — they’re just unauthorized. They’re real sunglasses, and maybe they’re made in China instead of in Italy and look a little different from the originals, but they still exist in the world. And there are some advantages to having Canal Street sunglasses or a Tom Sachs Mondrian.

AK: You’ve also heavily referenced pedestrian brands such as McDonald’s andSanrio in your work over the past decade. What’s your relationship to these companies’ products, and why do you keep coming back to them?

TS: The two most-recognized words on the planet are English words. One of them is “OK,” and the other one is “Coca-Cola,” or “Coke.” Sanrio and McDonald’s are pedestrian compared to Chanel, but they’re much more important referents because they connect with more people. My work has always been about using images and icons that people can relate to because the elitism in contemporary art is a huge source of personal frustration. To me, using Sanrio and McDonald’s is about opening the conversation about art up to identifiable objects in the real world.

AK: You have several Hello Kitty sculptures in your new series of bronzes, currently on view at Lever House in New York and Baldwin Gallery in Aspen. Why did you choose to represent that character?

TS: One part of the bronze collection is industrial, with sculptures of car batteries,dumpsters, street lamps, skateboard ramps, etc. — just to be appreciated for their form. The other part, with Hello Kitty, My Melody, andMiffy Fountain, has playful characters people can relate to. I walk down Park Avenue, and I see tourists standing in front of the Hello Kitty, taking pictures, smiling, and pointing and laughing. But they walk right past the car batteries and stuff that I’m very interested in, because that’s threatening modern art.

AK: References to music and musicians are also constants in your body of work. How has music — particularly punk, dub, hip-hop, and DJ culture — influenced your art?

TS: As much as I’ve studied painting, sculpture, and architecture, music is really the art that connects me. I’m so grateful to the musical artists I look up to and admire, so I sort of thank and share them through the titles of my works. Dub music is especially important to me because it’s all about reusing, recycling, reconstituting, and expanding. I think that the music of the African diaspora, which dub is part of, is the art form of the 20th century — and, through slavery, it’s linked to America’s industrial dominance, which is one of my primary interests.

For me, the key band was Public Enemy. Their politics resembled the politics of punk and hardcore, but they had the whole African-American race rage, and they were very engaged with it. What they were doing with their music — using a car alarm as an electric guitar, or samples from Malcolm X speeches or The Godfather — was like whatRobert Rauschenberg was doing with collage or pastiche.

AK: In your Fondazione Prada catalogue interview with Germano Celant, you state that “Creativity is the enemy.” What do you mean by that, and how is that point of view conveyed in your work?

TS: “Creativity is the enemy” means that artists should eliminate caprice from their work; it means doing the minimum and making elegant gestures. In other words, when you put together a complicated sculpture, try to have as few unnecessary elements as possible — try to keep it streamlined. In this world, you either have a new idea, or a new way of saying it; rarely do you have both. I think the audience can only absorb one thing at a time. When I’m working with my team, I always say, “Do not introduce creative things. Do not try and innovate. Just try and plug on through, and keep making it.” If you try to do too much, the work becomes overly complicated, and anyway, when you die, it will probably just get thrown away.

The thing that I always try to show in my work is the history and the evidence of construction, as well as the fuck ups, the mistakes — I think those kinds of things add value to art. I used to call that “process-oriented conceptual art” because you see all the marks. We live in this world of perfectly made things, but one of the luxuries that I have as a maker is showing how the thing is made — not in a messy and indulgent way, but in a really direct way that shows my skills, and the humanity of the object and the process.

Transmissions from an island somewhere in the Philippines. Integrating daily art practice & other initiatives from the physical world down to virtual space. To see my daily artworks, you can visit my site at: http://dailypractice.tumblr.com http://brownskinartist.multiply.com
View all posts by fARTiculate →
This entry was posted in art exhibition, installation art, sculpture and tagged alex moscoso espanola, animals, ashtray lion, california, daily dose of humor and art, daily practice, dead to me, farticulate, hardcore, laguardia, negro music, quality, raytheon lamp, sperone westwater, the sachs piano, tom sachs, waffle bike. Bookmark the permalink.